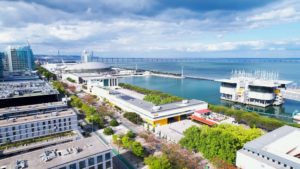 September presented itself as a very active month, providing several announcements about investments and transactions throughout the weeks. After a very dynamic summer, the return to most activities brought up a very active real estate market in most segments.

With particular emphasis on the housing, office and hotel segments, September saw several announcements which demonstrate resilience in the real estate market, even after two years of pandemic crisis and with a new economic scenario emerging motivated by Russia’s invasion of Ukraine.

The month began with the announcement that the IHRU (Instituto da Habitação e da Reabilitação Urbana) is going to launch three more tenders for the development of projects for the Quinta da Baldaya, Quinta das Conchinhas and Rua do Beato developments, all of them in Lisbon. Altogether, these operations represent a total of 456 homes and an investment of more than 90 million euros.

The Lisbon City Council also announced the willingness to launch a public auction for the sale of five municipal plots of land for the construction of housing in the parish of Lumiar, with a total base value of 20.9 million euros.

With September coming to an end, PREDIBISA has presented the new NATURA project. This innovative housing project is located on the land of the emblematic Efanor factory, in Matosinhos, a place of choice for those looking at living in the city centre. The value of the investment was not disclosed.

In this segment, to highlight is the news of the acquisition of the Real Business Centre, in Viseu, by Real Vida, in the beginning of the month. This is an office, commercial and multipurpose building, in which the insurance company invested 4,5 million euros in rehabilitation, in an operation whose total cost is 7 million euros. The building was officially opened on the 15th of September.

Norfina has also announced the launching of the “Oriente Green Campus” office building. The construction should be completed during the second half of 2023 and promises to bring a new impetus to the northern part of Parque das Nações. The building is located in Moscavide and will have a total office area of ​​41.100 m2 as well as 18.700 m2 of outdoor areas.

With the month coming to an end, Henderson Park has announced an investment of 25 million euros to modernize Lagoas Park. The private equity real estate company announced the investment for the renovation of the most prominent business park in Portugal and the largest in the Iberian Peninsula. The ambitious modernization project will enhance indoor and outdoor areas as well as collaborative spaces. The business park has been the destination of choice for the national headquarters of internationally renowned companies.

In this segment, Sonae Sierra has announced that it is going to manage CTT’s real estate assets. The company was chosen to manage 400 retail and logistics properties, valued at around 110 million euros. The official announcement should be made at the beginning of November, however, it is known that the portfolio is composed of stores, normally located in the centre of the localities and by CTT’s warehouses and logistics/distribution centres.

In this segment, it became public that the Mais Group has acquired land in Setúbal for the construction of a new hotel, in an investment of 8,5 million euros. The new hotel will be built at numbers 2, 4 and 6 of Estrada das Machadas, where there is currently a vacant property to be demolished. The hotel, with a gross building area of ​​3.591,30 m2, will have 120 rooms on six storeys, a basement for parking and a technical features storey. The opening is scheduled for the summer of 2024.

Meanwhile, Arrow Global Portugal has acquired the Hotel California. The four-star hotel, with a total area of ​​3.900m2 and 80 rooms, is located in the centre of Albufeira and 100 meters from Praia do Pescador. Renovated in 2019, its amenities include the roof top pool and bar overlooking the historic city centre, the spa & fitness centre and the sushi restaurant. The investment value has not been disclosed.

Cais do Sodré, in Lisbon, is also the target of news. On the block where the Jamaica and Europa nightclubs once operated, Room007 Pink will be born. The new hostel, which will create around 25 new jobs, is scheduled to open in 2025 and will have 80 rooms spread over the six storeys of the building.

At the end of September, MercanProperties emerged in the spotlight with the acquisition of real estate for a new hotel in Faro. The assets will be the subject of a rehabilitation and real estate development project, giving new life to that space. With a gross building area of ​​approximately 6.500 m², these properties are a unique opportunity to promote a new project in the Algarve. The investment value has not been disclosed.

At the beginning of the month, Hipoges has announced the sale of “Project Liberty” for a value of over 10 million euros to an international developer with the aim of becoming a redevelopment project. Located in one of the most privileged areas of the city, right on Avenida da Liberdade, the building consists of 10 storeys above ground and 1 basement with a total area of about 2.500 m², divided into 10 independent units, namely 1 retail store and 9 offices, without horizontal property.

At the end of the month, it has become public that a CUF clinic will be born in “Terras da Comporta”. VanguardProperties and CUF have teamed up on the project of a proximity clinic in Comporta. The new health unit has an investment of two million euros and the building will be built in the “Dunas” subdivision, in the municipality of Grândola, parish of Carvalhal. The clinic which will be strategically located in a space of the enterprise has its opening scheduled between the end of 2023 and the first half of 2024.