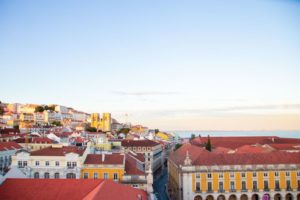 Despite the Portuguese economy experiencing a less favourable moment, mainly due to the rise in inflation and interest rates, the advent of autumn presents itself as a breath of fresh air in the real estate market. October was no exception, proving to be a month in which the industry is once again alert and overcomes any adversities. Proof of this were the announcements that stood out in the housing, offices and above all in logistics segments, the latter being the most highlighted in October, with strong investments and announcements.

At the beginning of the month, Habitat Invest and Patron Capital announced the acquisition of a plot for the construction of 514 new apartments in Almada. Located in one of Almada’s main expansion areas, Almada South Living covers an area of 9.600m² and has a construction capacity of approximately 51.000m². The investment value has not been disclosed.

Halfway through October, NORFIN presented “Campo Novo” in an investment of around 300 million euros. Most of the investment in this project will be provided by the North American fund King Street Capital Management which, together with the Arrow Global Group, owns the land. Located in the Campo Grande area, in Lisbon, it has 80,000m2 of construction above ground and provides for the construction of three residential condominiums (30.300m2) and four office buildings (37.600m2), joined by a commercial area with 12.100m2.

Meanwhile, Norfin and Castle Capital launched Lisbon Heights in an investment of 41 million euros. Construction has already started and is scheduled for completion in December 2024. The new private condominium already has 35% of the units reserved, resulting from private sales. The exclusive private condominium will occupy an area of about 20,000 m2 and consists of 95 units, divided between 13 villas from V1 to V5, and 82 flats, from T0 to T4, to which 7 commercial spaces are added.

Lastly, Laskasas launched its first real estate project. The Portuguese furniture and decoration group is advancing with the construction of its first residential development, located next to Mercado do Bolhão. This is the first of 8 projects that involve an investment of around 18 million euros.

In mid-October, Mota-Engil ATIV, a new brand in the Mota-Engil Group’s universe, announced that it had chosen Alverca Park to establish its new offices. The company will occupy an area of 1700 square meters, which corresponds to the entirety of the 2nd floor of Block A (owned by Mitiska REIM), thus becoming the largest occupant of that building.

Soon after, Cofidis opened its new headquarters at the Natura Towers, located in Lumiar, in Lisbon, in an operation that represented an investment of 46.5 million euros. The Natura Towers mark a new phase for the company in Portugal and reflect three strategic axes: sustainability, transformation and openness to the outside world.

By the middle of the month, Interfundos sold two office buildings in Gaia and Porto. These are the Via Gaia and Júlio Dinis buildings, both located in the Porto Metropolitan Area. The new owners are the Fortera Group and the Horizonte Urbano Group. The investment value has not been disclosed.

ALDI Portugal stood out in this segment, with two major announcements. By the middle of the month, ALDI Portugal opened its first store in Alcobaça, in the district of Leiria, in line with its expansion plan. The new ALDI Alcobaça will be the first space for the food retailer in the municipality, with a total sales area of 1.040 m2.

At the beginning of October, LOGISLINK, an integrated company of GRUPO SOUSA, inaugurated the new Logistics Terminal in Azores Park. Located in Ponta Delgada, São Miguel Island, Azores. The infrastructure has a total area of 30.000m2, with a covered area of 8.500m2, of which 1.650m2 are cold areas. This investment of around 11,5 million euros will have the capacity to store 6.000 pallets.

Soon after, MC, Sonae’s food retail company, announced the occupation of the first building of the Rainha Green Logistics Park, in Azambuja. This logistics park is the first investment in Portugal by Green Logistics, a brand in the logistics area of the German group Aquila Capital, and is part of the Aquila Capital Southern European Logistic fund. The two-building logistics complex and associated urbanization work represent an investment of around 100 million euros.

October was already halfway through, when VGP, a pan-European company which promotes and invests in high-quality logistics and semi-industrial parks, laid the first stone for the construction of the VGP Park Loures. The investment value, between land acquisition and works, is around 30 million euros. The VGP Park Loures marks the arrival of VGP in Lisbon and is the first project 100% dedicated to Last Mile logistics, after the Group’s entry into Portugal in 2019. The project is already 100% leased to DPD and DHL.

Meanwhile, Grupo Violas Ferreira announced the acquisition of Sovena’s headquarters in Arquiparque. The building was sold by MelloRDC, through its subsidiary Arquimelo, to Grupo Violas Ferreira. The value of the investment is around 8 million euros. Sovena, the world’s leading company in the olive oil sector, which has occupied the building since 2012, with a lease in force until 2030, will remain in the property. The building is located in the renowned Arquiparque office park, located on the fringe of the A5, in Miraflores, at the entrance to Lisbon. The asset totals around 3.500m2 of offices spread over six floors, to which there are 62 parking spaces.

With the end of the month approaching, Montepino’s logistics portfolio managers, Bankinter Investment and Valfondo, announced Montepino’s first international project, with the acquisition of land in Lisbon, in an investment of around 150 million euros. The asset, with an area of ​​almost half a million square meters, is fully licensed and construction is expected to begin later this year.

In mid-October, it became public that an old restaurant, closed for several years by the Lima River, in Serreleis, Viana do Castelo, will be transformed into a themed hotel. The four-star Filigrana ‘design’ hotel will have 26 rooms and will be the new unit dedicated to filigree, in an investment of more than 1,7 million euros. The former seafood restaurant has 2.440 square meters, with a total land area of ​​8.136 square meters.

Towards the end of the month, Azora Capital acquired The Lodge Hotel in Vila Nova de Gaia. The luxury five-star hotel, built on the former warehouses of the Real Companhia Velha in the riverside area of ​​Vila Nova de Gaia, was sold by Pluris Investments to Spanish Azora Capital, which, with this operation, reached its fifth acquisition in our country.

Also at the end of the month, there was an announcement that Explorer Investments and Pedro Seabra had acquired the real estate fund manager Refundos SGOIC, S.A. to Rivercrown Real Estate Management. This operation allows for the reorganization of Explorer’s real estate business, which is now managed by the company Refundos Explorer.

Finally, VIC Properties has put the assets of Matinha and Herdade do Pinheirinho for sale. The two assets, previously mortgaged to NovoBanco, had been purchased by VIC Properties from this bank in 2019 and 2020, respectively. The Prata Riverside Village project, located in the eastern part of Lisbon and whose construction is almost completed, was also put up for sale. VIC Properties hired Alantra to advise on the sale of the three real estate projects.