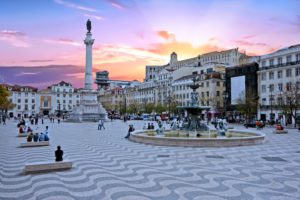 The second half of the year started in the best way, with many investments and transactions in the various segments of the real estate market. Housing and hotels have been the centre of attention in recent months, with regard to news about the sector, but the month of July also brought a lot of news in the student housing market.

Meanwhile, the month was already half way through when the city of Olhão, in the Algarve, announced the new Delmar Waterfront with 118 apartments. The apartments in the private condominium next to the Marina of Olhão have areas between 72 and 163.5 m². The investment value was not disclosed.

SOLYD Property Developers also launched Jardins Altear, its latest residential project in Alta de Lisboa. This is the eighth launch of ALTEAR, the real estate developer’s residential project. ALTEAR will offer the market more than 500 apartments with different types and commercial spaces, with a total construction area of ​​over 120,000 m2.

Socicorreia also announced the construction of 4 residential buildings in Câmara de Lobos. The group presented in Madeira, a housing complex consisting of 4 buildings, in a total of 34 dwellings, on the site of the Tower. The new complex, at controlled costs, is budgeted at 6.2 million euros.

At the end of the month, it became public that the residential project “Campolide – Nova Goa” will be born in Lisbon. It is next to Praça de Espanha that the new development with 59 apartments will be born. The plot provides for the construction of 7,500 m2 above ground, spread over 59 apartments. With no investment value revealed, the venture will be born next to the Universidade Nova de Lisboa.

Blackstone announced the acquisition of a portfolio of 15 M7 logistic properties for the total amount of 125 million euros. The buildings are leased to distribution and retail companies. This is the second logistics portfolio that the North American Asset Management Company has purchased within a month.

Also in early July, Trei announced that it intends to sell 50 supermarkets for 150 million by August. The German company of the Tengelmann group wants to sell what is considered the largest portfolio of supermarkets in Portugal, a portfolio called “Project Amália”. Trei has available on the market 44 Pingo Doce, a Continente, a Minipreço and other assets located mainly in Porto, Lisbon and the Algarve.

Meanwhile, Santarém Retail Park announced that it will receive the Mercadona supermarket. Mitiska REIM, the current owner of the Retail Park, is committed to a destination of convenience for all consumers. By the end of the year another four stores are expected to open.

In early July, Round Hill Capital announced the purchase of the Smart Studios network for €200 million. The group acquired the network of coliving spaces and student residences, which includes 2070 apartments in Lisbon, Carcavelos and Porto.

Soon after, the Polytechnic of Leiria announced that it will have 614 more beds by 2025. The investment in the new vacancies is financed by the PRR and will cost more than 25 million euros. Applications for the construction of new residences and renovation of the current ones were approved.

Meanwhile, the new NIDO student residence has opened its doors in Campo Pequeno. The student accommodation project of the international chain Nido, which offers a total of 380 rooms of 15 different types, is now accepting reservations for September. NIDO is Round Hill Capital’s student accommodation management brand and has extensive experience in the PBSA (Purpose-Built Student Accommodation) market in different countries. Nido does not put forward the investment values ​​of the project for now, however Round Hill Capital together with TPG Real Estate Partners made an investment of 150 million euros in the acquisition of land in Campo Pequeno for the construction of the projects (Lumino and Nido).

At the beginning of the month, Arrow Global Portugal announced its intention to invest 500 million euros in Hospitality. The group that owns Whitestar Asset Solutions, Norfin, Restart Capital and Hefesto in the country, also having, through the ACO1 Fund, a stake in Vilamoura World, launches a new business vertical with the aim of developing and manage tourist assets. Arrow Global Portugal intends to make the investment within five years and has just acquired 75% of the Details Hotels & Resorts hotel group in the Algarve.

Meanwhile, the Vila Viçosa Convent will be converted into a luxury hotel. The Convento de Nossa Senhora do Amparo will give way to the Anantara Royal Vila Viçosa Resort in an investment of 21 million euros. The Thai brand Minor, which owns several Tivoli hotels in Portugal, is now betting on a new hotel located in Vila Viçosa, in the district of Évora.

Also in early July, Delsk Group Portugal acquired the Vip Inn Miramonte hotel. The transaction amount was not disclosed. The hotel that belonged to Sociedade Hoteleira de Colares is located in Sintra and is considered an ideal asset for repositioning in the region. Located more precisely in the village of Colares, the 3-star hotel has 92 rooms.

It was already halfway through the month when Cerro Mouro presented itself as the new eco resort that will be born in the southwest of the Algarve. The development has 24 eco-friendly luxury homes and is due for completion by the end of 2024. The project is an innovative and exclusive eco-resort, born out of a passion for this corner of the country, in the sunny village of Barão de São João, in Southwest Algarve. The investment value of the new real estate project was not disclosed.

Meanwhile, Yotel Porto was sold for around 28 million euros. Fidelidade Sociedade Gestora acquired, through the IMOFID real estate fund, the hotel in Porto and two more buildings in Spain, totaling an investment of 100 million euros as a whole.

At the end of July, the Flow Group announced the investment of 18 million in the municipality of Loulé. The investment is intended for structures located between the areas of Vilamoura and Quinta do Lago. Expected until 2023, the amount will be allocated to the area of ​​​​restaurants, hotels and nightlife.