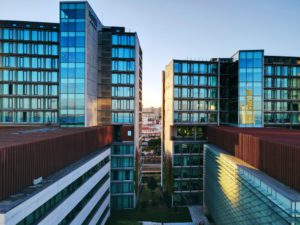 Almost at the end of the second month of the year, and with Carnival about to arrive, last week saw another remarkable run for the real estate market, with major investments in housing and some news about hotels.

The week began with an announcement that the Fábrica da Cerveja in Faro will be converted into a creative hub. The Faro Town Hall will invest 13.4 million euros as a part of the city’s candidacy to become the 2027 European Capital of Culture. The refurbishment will take around five years to complete and is intended to be used by a network of local, regional, national and international partnerships. The intervention will encompass four phases, with the first two estimated to be completed in 2026 or 2027.

Meanwhile, Brainsre News Portugal has learned that OSQUARED invested around 32 million euros in a new project in Porto. At stake is the project Olimpo Studios, located on Rua Professor Armando de Castro, a few minutes away from well-known areas of the city of Porto. OSQUARED, a member of the Omer Group Investments, founded by the Israeli businessman Eli Omer, aims to create unique projects and timeless architecture and enters 2022 with this new real estate project, building and later marketing 218 flats. The company expects to invest 200 million euros by 2026, with the objective of building around 1000 units.

Closing the week, the Vila Galé Group announced that it would invest around 35 million euros this year in four hotels in the Azores, Tomar and Beja. Among the news is a €12-million investment in renovating part of the former Convent and Hospital of São Francisco, in Ponta Delgada, Azores, converting it into a boutique hotel in partnership with Santa Casa da Misericórdia. In the centre of the city of Tomar, Vila Galé will recover and refurbish several areas of the former Convent of Santa Iria and the Women’s College, with an investment of around ten million euros. For Beja, the hotel group has two projects in the pipeline: Vila Galé Nep Kids and Vila Galé Monte da Faleira. The first should cost approximately ten million euros, while the second will involve an investment of about three million euros in a new agrotourism.